KAMI AND OTHER SPIRITS 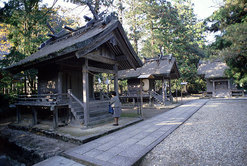 A shrine built for kami worship
Kami is the Japanese term for 'spirits' and other kinds of supernatural forces that exist in nature. In addition, it can also refer to gods and other deities, but in general, kami are spirits typically associated with natural phenomena that exist in the everyday world. For instance, any aspect or form of nature, i.e. mountain, river, tree, etc..., may be thought to have a kami associated or housed within it. Sometimes, this kami may favor and be beneficial to humans that live near the existing phenomenon. For example, a benevolent or happy kami living in the mountains can help a farmer by providing water to his crops during spring. And vice versa, the opposite can also be true; an angry kami can cause great destruction to the area and people that live near it.

Kodama in the film, Princess Mononoke
Kodama are a type of spirit associated with trees, very similar to the dryads of Greek mythology. However, not all trees have kodama that reside inside them. Rather, these spirits tend to inhabit older and larger trees that are a part of a forest and they protect the forest from any harm. It is said that if you cut down a tree that houses a kodama, you will be struck with bad luck and misfortune.

Paper shikigami-birds in the film, Spirited Away
A shikigami is a term used to describe a spirit used by onmyouji, or sorcerers. Summoned by an onmyouji, these spirits exist to protect and serve their masters--very much like the Western concept of a witch/wizard's familiar. Shikigamis can assume many kinds of forms, the most common type in legends being enchanted paper cutouts, which can produce the illusion or guise of real-life objects and creatures. Typically, shikigami are used by onmyouji to carry out risky tasks, such as spying, stealing, and tracking enemies. 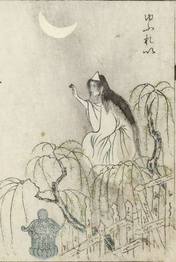 A painting of a female yurei
Yurei, which literally translates to 'dim spirit,' are spirits of deceased individuals that have been kept back from moving onto a peaceful afterlife--similar to the idea of ghosts in Western legends. The Japanese traditionally hold the belief that all humans have a spirit or soul, called a reikon. When a person dies, the reikon leaves the body and enters a process of purgatory. It is here that the reikon waits for its proper funeral and rites to be performed and completed, so it can move onto the afterlife and join its ancestors. However, if a person were to die in a sudden or violent manner, such as from murder or suicide, if no proper funeral was given or rites performed after their death, or if they were influenced by negative emotions like hatred, jealousy, or revenge when they were living, then the reikon will transform into a yurei. The yurei will then remain stuck on earth until it can be put to rest, either by performing the missing ritual/burial or resolving the emotional conflict that had kept it tied down in the first place. But if these are left uncompleted, then then the yurei will continue to haunt and remain on earth forever.